The story started back in January 2016, when I (Mike Brittlebank) was asked to inspect the track west of the run-round loop at Castle Hills. What Alastair Connell and myself found, was that the track had a 47mm twist, and had moved 50mm south. The cause of this defect was that the track bed had been undermined by rabbits. The eastern points also needed six new point timbers. As an interim measure we will fit three gauge ties. The run round loop had a 30mm drop at the points, all of these items resulted in a ban on all trains going to Northallerton West. Added to this was the state of the track west of Finghall station where a 5MPH speed limit had been imposed. For commercial reason it was imperative that the section west of Finghall was repaired first, as we had neither the money nor the manpower to fix both simultaneously. An audit showed that Castle Hills section required 600+ sleepers to be replaced. This equates to 30+ weeks of hard work, and which would not solve the twist problem. While this work is going on we would not be able to work elsewhere on the railway.

The solution that evolved was to replace all track from western end of the points at Castle Hills to Wiske Bridge, over a three year period with flat bottom rail and concrete sleepers. The initial stage would be from just before the start of the twist and replace the track in the worst section. This was the plan: replace 600 feet of track with flat bottom rail, the flat bottom rail coming from Bedale loop. Once the sleepers were removed, 100mm of ballast would be dug out, and pushed over the south side of the track, level the track bed, place the concrete sleepers in position, rubber pads, rails and clip up, ballast and tamp. The estimated cost for this year was 20K. The cost for next year will be 35K as we will need to buy in flat bottom rails. As well as that, all the trees had to be taken down, drainage has to be reinstated, and rabbits killed. The trees were taken down from the western points to the end of the first replacement track section. Gassing rabbits is going to be very dangerous, as during the evening hours the number of trespassers on the railway is very high. Best time for gassing rabbits is during the winter with shorter days - hope we will have no trespassers on the railway.

After this the ballast neeeds to be levelled off and finally the tamper to go over. The guys working this last week in June need a big thank you. The working conditions were terrible, every one got soaking wet. Some people took time off work to help out, using up their holidays. Well done every one.
A big thank you to every one who helped out, especially Ops, Vegetation team (who also helped with the track work), Infrastructure and Alastair Connell, without whose knowledge and know how this project could not have been done.
Mike Brittlebank - Infrastructure Manager

Photographs
The photos below were taken by Ian Yale, Steve Hall, Andy Waite and Mike Brittlebank 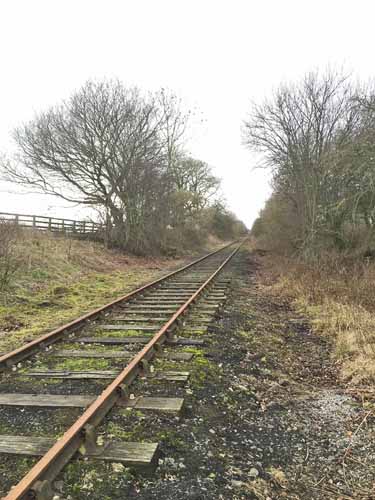